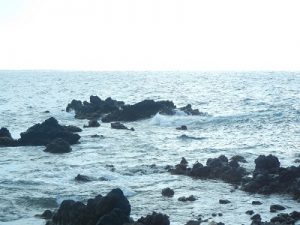 Today was Maui, which I was really looking forward to since one of my co-workers had lived there and talked about its beauty.  We hit the buffet, and yes, it was Walmart on sale!  Like everyone else, we wanted to eat and get off the ship so we could start exploring.  We had rented a car from Thifty for the day and ended up keeping it for both days.  We also got the GPS (I was going to use the one on my phone but this turned out to be much smarter) and of course if I’d thought I would have just brought mine from home.  However, they have theirs set up with top places to see and even how to get back to their office, so that part was nice.  For today we went to West Maui and drove the coast around this whole section.  We stopped at the Maui Ocean Center and looked around that area for a while, then continued on around the island.  We stopped at a few places to look for whales but didn’t see any.  Then it got interesting.  The road was so narrow that many times it was a one-lane road (even though it went 2 ways) with a mountain on one side and a sheer drop off on the other, with no guard rail.  At one point I was driving and we met another car.  The choice was for me to back up, but I was petrified so finally let me husband do the backing and driving.  This road twisted and turned between the mountain side and ocean for over 3 hours! 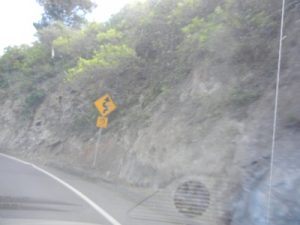 We stopped at Julia’s Banana Bread Treehouse (can’t miss the bright green building!) in Kahakuloa Village for some warm, fresh banana bread that was excellent!  It turned in our meal (because there sure wasn’t anywhere else to eat on this road!). 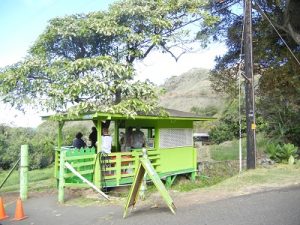 Honestly, there were very few houses and even less towns along here.  I would hate to live out there and be out of milk!  The scenery around this part of the island was amazing, but yikes, this road was awful on the nerves!  I’m not even sure you could call part of it a road.  We did find out later that you’re not to take rental cars there as it can void the contract.  Oops!  Well, due to that mistake we did get to see the amazing scenery that we would have missed otherwise.

After we got around that part of the island we headed south to Makena.  Again, beautiful flowering trees and bushes and toward the end of this road were lava fields that were really neat to see!  We were back in to a few places where the 2-way road was only one lane, so it was still rather interesting at times.  This road ends, so we turned around and went back to the pier.  By now the banana bread just wasn’t enough and we were ready for some food.  There is a very small lot right at the ship which was free to park there, so we left the car there and boarded the ship.  It was really odd to stay overnight in one place and a lot of people stayed off the ship until quite late, or left very early the next morning. 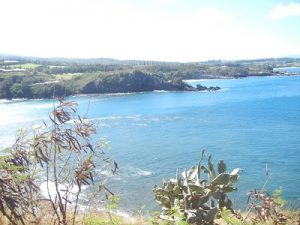 Back on the ship we had a very late lunch in the Aloha Café then went to the show, which was Aloha Polynesia, which was Hawaiian performers they’d flown in from Honolulu for the show.  It was an excellent show with a variety of hula dances.  After the show we went to karaoke, which we usually enjoy.  There were about 6 people in there, 4 of which were some of the ship performers.  They did most of the singing, and weren’t near as good as they thought they were.  We didn’t stay long as we could see this wasn’t going to get much better so we headed back to the cabin and called it a night. 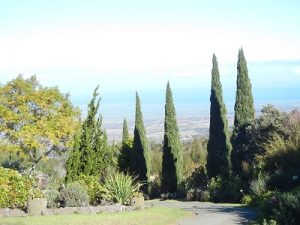 We got up early, had breakfast and headed out to our car.  Today we were going to go to Haleakala National Park.  This is a volcano that’s 10,000 feet up, and quite large.   On the way there we stopped at the Ali’I Kula Lavender Farm, which was quite interesting. 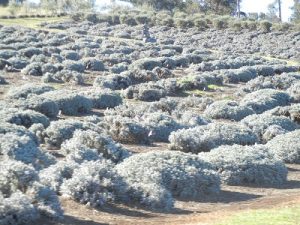 They had beautiful gardens and the view was just amazing.  We didn’t have time to do a tour but walked around and saw some of the different kinds of lavender plants and spent some time in the gift shop, I had no idea you could do so many things with lavender!  We had some lavender coffee that was quite good.  I wouldn’t want it for every cup, but once in a while it would be a nice treat.  We kept on going up the volcano, up and back and forth until we were looking down on the clouds!  It was quite a site. 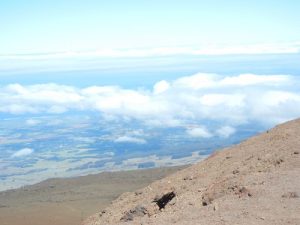 It was really interesting seeing the change in the terrain, from lots of flowers and grass, to less grass,  to no grass.  One very cool thing that they have is the Ahinahina (silversword), which is only found here.  It flowers once, after about 50 years, then dies.  None were flowering but we did see some very large plants, and some that had flowered.   We were lucky that we could look into the top of the volcano, which is the size of Manhattan.  By the time we left the clouds were rolling in and had covered about a third so were glad we’d gotten there when we did.  Much later you wouldn’t have seen much. 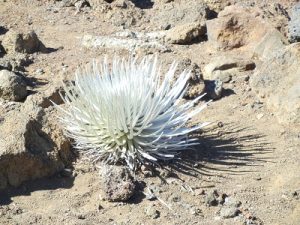 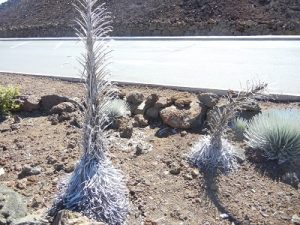 We turned our car back in and took their shuttle back to the ship.  We had another late lunch then got ready for the show.  The show originally planned for tonight was having some technical difficulties so they changed it around to one that was to be later in the week, Never Too Old to Rock n’ Roll with Toby Beau.  Toby Beau was the band that sang “My Angel Baby” and this was one of the original members that had bought the name.  He put on a great show singing songs from the 60’s & 70’s.  After the show we went to the Not-So-New Newlywed game, which was ran better than we’d ever seen before.  We’ve seen some that enabled couples to cheat, which is just annoying, so enjoyed this how.  After that we ate dinner then headed to bed.  After being there for over a week we still weren’t used to the time change. 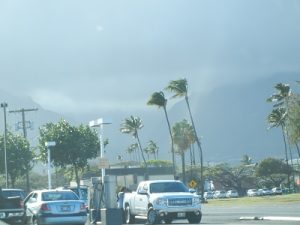 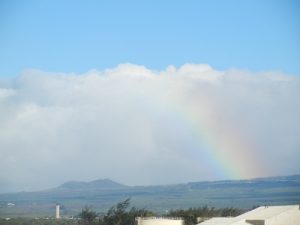