Today we’re in Kaua’i, which is another overnight stay.   They have shuttles running to several locations such as Walmart, Hilo Hatties and Anchor Cove, which is where we were to meet our car to go on a flightseeing trip over the island.  We took the shuttle and the driver told us to be sure to go to the Kauai Marriott Resort on Kalapaki Beach at this stop to see their botanical gardens.  We had plenty of time so we walked over there and found it well worth our time.  I’d love to come back to stay there some time.  They have a beautiful beach, huge pool and gardens I would love to have in my yard!    There are several shops in this area as well as some vendors making and selling their wares. 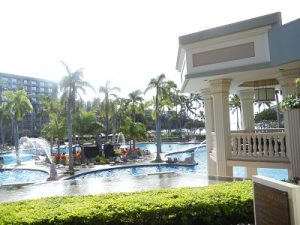 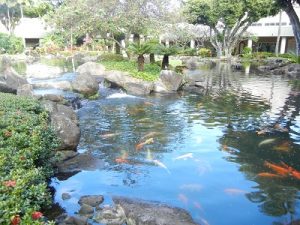 We were picked up to go to the airport for our flight with Wings over Kauai where we visited with the owner of the company who was also our pilot.  I’m not big on flying, but knew my husband would really enjoy this.  We were in a nice 8-passenger plane where we were shown a cooler with water and drinks and shown how to use the headsets.  They also left the door cracked open to keep a breeze in there, which was nice as it was quite warm.  This was definitely the highlight of the trip!  Much of this island can only been seen from the air as there are only a few roads.  Right after we took off we saw a few whales below, which was so exciting.  I never realized they had such bright blue fins! 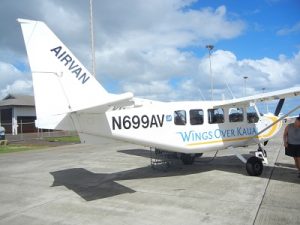 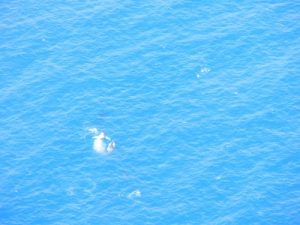 We then flew over the mountains and saw several waterfalls as well as beautiful lands, then by the Na Pali Coast, which was more beautiful than pictures can show.  It was so great to be up so close to them.  We ended with seeing 3 waterfalls all together.  What a picture!  What a wonderful experience with a wonderful company! 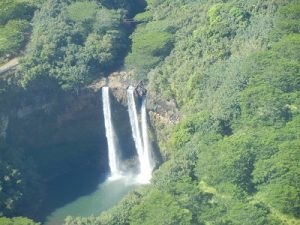 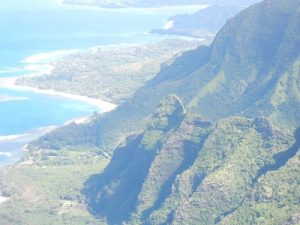 Tonight we were having dinner in one of the specialty restaurants, Little Italy.  We were looking forward to this as our friend’s girlfriend works here and we were excited about seeing both of them!  We were seated outside, which was enjoyable since we weren’t moving but probably would have been cool and breezy if we had been.  Grady joined us and we had an excellent meal with excellent company and service.  What a perfect way to continue our day. 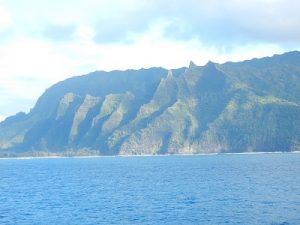 Unfortunately, the perfect ended there.  As we always do, we headed to the show, which was a production number called Rock-A-Hula Luau.   Out of our 29 cruises, we’ve only walked out on one other show, until this one.  I truly have never seen such bad acting, singing or story line.  And we weren’t alone as from about 10 minutes into the show there was a steady stream of people leaving.  I’ve never seen that happen.  They really need to do away with this show.  Most cruise lines have a very good production staff, but I’m afraid NCL fell short on this.  That’s the only thing we could fault them with, though, but this was quite disappointing.

We headed up to the Mardi Gras lounge for Bud Andersen’s late night show.  Another great show and done without being the vulgar show that many late night shows can be.  I would go watch this guy any chance I got!

Today we were going to rent scooters and explore the island but it looked like rain so we decided to just browse the shops again and hang out on the ship.  We took the shuttle to Walmart then walked to Hilo Hatties (we found out they were near each other and Walmart’s shuttle came first so we just jumped on that one).  We’ve been in other Hilo Hatties that were really nice stores, but this was just wasn’t so much.   We didn’t stay long then took the next shuttle back to the ship.  We went back to the ABC Store for some last minute shopping then spent the rest of the day on the ship.  We were leaving port earlier today so we could sail by the Na Pali Coast.  Before we left we spent a few hours on the balcony just watching the whales not far from our ship.    We cruised slowly along the coast, and saw a few more whales breeching.  Pretty cool!  The Coast was spectacular although we had seen it closer when we fly by it.  It’s still am amazing site!  We cruised by there while enjoying snacks and drinks on our balcony (thanks Grady!). 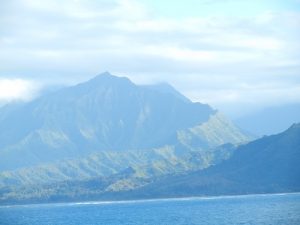 We ate then headed to the show.  We kept thinking we’d eat in the main dining room, but just never made it due to our schedules not working out.  The food in the Aloha Café was so good that we never missed the dining room.  Tonight they were finally able to present Light’s, Camera, Music, which is the one that had technical difficulties earlier in the week.  This is a brand new show and only on this ship so far so they’re still working out the bugs.  The show was ok, but the production staff still just didn’t have what it took to be great entertainment. 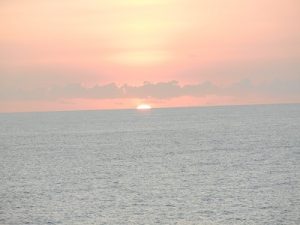 We carried our luggage off the ship but saw that it would have been very easy to claim our luggage had we not.  The luggage was set out in a very orderly fashion in a large terminal, and not having left the US we didn’t have to go through Customs so we just walked outside to wait for our town car.  Again, we had quite a long wait so not sure what the excuse was this time.  I don’t mind waiting a few minutes, but each time they were at least 30 minutes late.  Not impressed.  He took us to the airport where we had a few hours before our flight.  I worked awhile, then we got lunch before heading to our terminal.   Flying from west to east isn’t fun with the time difference.   We also had the short time in between flights in LAX again, although not quite as bad since we got in on time, but we still had to hurry and got to the gate just in time to get on the plane.  No problems, I knew they sold food.  Wrong!  Even though they had a list of sandwiches, etc, all they had on this flight was a very small snack consisting of nuts, one small piece of cheese and a cracker.  Woohoo!  When we landed in Florida Sunday morning we hit up the fast food and headed home.

This was a wonderful trip and we’re so glad we got to see other islands.  They all are different and have their own personalities.  I’d like to go back and spend some more time on a couple of them.  Even with this great itinerary that let us be at the same place for a couple of days there still wasn’t enough time to see and do all we wanted.  Aloha and mahalo! 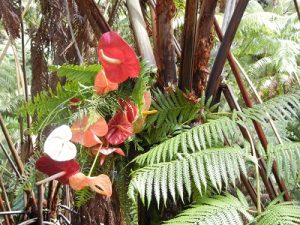 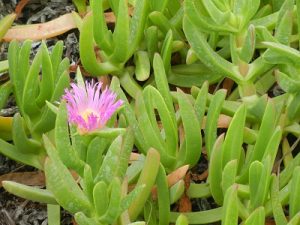