Royal Caribbean offers a unique experience on their ships that have the Japanese restaurant Izumi.  This experience is Sushi Making and it is a fun experience that you can book either in advance or on the ship.  Classes are small and are taught by a certified sushi chef. 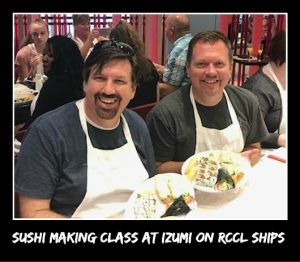 When we arrived at our scheduled time we checked in and were directed first to a sink where we washed our hands prior to touching the food.  Then we were given gloves that we wore for the duration of the class.

Each participant was given a seat at a table or the sushi bar.  And given a plate of the sushi ingredients and a bowl of sushi rice.  Also included at the station were pieces of seaweed (nori) and chopsticks. 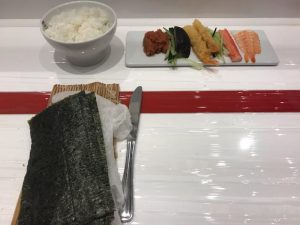 The instructor, a certified Sushi Chef arrived and instructed us in the history of sushi and the meaning of several of the words.  Then it was time to make the sushi.

The first roll we were taught to make was a California Roll consisting of crab, avocado and cucumber and was rolled inside out with the rice on the outside and the nori on the inside.

Next we made a crunchy shrimp roll with deep fried shrimp and avocado.  It too was rolled inside out.

At this point the chef decided he could introduce a more difficult hand roll.  This one was with spicy tuna and was rolled like a cone with the nori on the outside and the rice and ingredients inside the cone.

Finally we made nigiri which is rice with seafood on top.  We formed ours in a rectangle and topped it with butterflied shrimp. 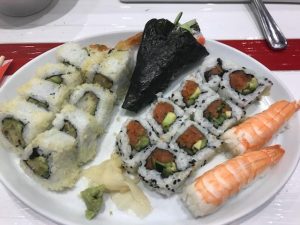 At the end of the class all the participants were “evaluated” by the chef to determine if we had done a good job.  Luckily, everyone passed the class and we were given a certificate of completion and then we were given time to eat our sushi.

The total class was about 90 minutes and for a price of $25 per person which was well worth it considering that we had so much sushi to eat when we were done.

If you are interested in booking a cruise on Royal Caribbean or any other cruise line please contact The Magic for Less Travel us for a free, no obligation quote.

I love all the Disney Theme Parks and try to go as often as possible. I am also a graduate of the College of Disney Knowledge. I have been to most of the Disney Parks throughout the world including Disneyland, Walt Disney World, Tokyo Disneyland and Disneyland Paris. I have sailed on the Disney Cruise and have been on Adventures by Disney Trips. My family and I love to travel to destinations all over the world.
View all posts by Ric Flack →